For a while, this book review consisted of these sentences, exactly like this: “THIS WAS TERRIFyiNG AND CRAZY WHAT A WILD RIDE.” And honestly, that sums up Sanctuary by Caryn Lix pretty well. 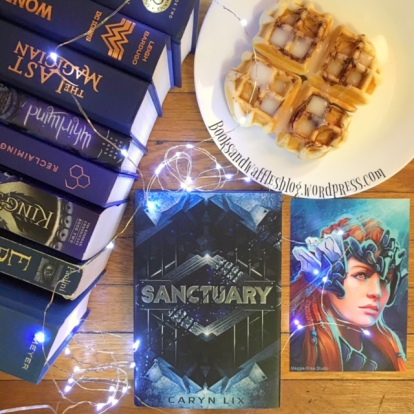 Kenzie has trained her whole life for one thing: to become a guard on a space prison for superpowered teens and uphold the Omnistellar Concepts company at all costs. When a routine drill goes sideways, Kenzie is taken hostage by the prisoners. But then something more sinister infiltrates the prison, and Kenzie must team up with the prisoners in order to survive.

Sanctuary is basically Stranger Things set in outer space (minus the 80’s references). There are kids with superpowers and spooky monster alien things that pop out of literally no where to scare the crap out of everybody and swipe bodies. It was amazing.

At first, I wasn’t sure about the book. It started off a bit slow, and Kenzie’s devil-may-care attitude was kind of annoying. (Because yes, let’s go into the prison cell block and take a peek at the prisoners even though you aren’t supposed to and it might end up a disaster. I can’t with dumb YA protagonists.)

But once the action happened, things became significantly better. This book is super intense though, and I was literally biting my nails as I read. The aliens in this are actually terrifying, and I freaking love the mythology of them. Seriously, it is such a great idea.

The characters are a bit so-so, though. Kenzie is a standard YA heroine, doing whatever it takes even if it seems absolutely impossible or reckless or over-the-top to survive and save everybody she can. Honestly, she reminded me of Kate Harker from the Monsters of Verity duology by Victoria Schwab. They both grew up with parents’ drilling crazy stuff in their head, they don’t know when to give up, and they fight monsters. (They’re practically twins!!)

The other characters aren’t as memorable. While reading, I enjoyed them, but later, I can’t remember anything significant about some of them. For one, there was a lot of them to keep track of. And second, I didn’t get to know them that well because things kept happening. This book is definitely plot driven, not character driven.

I wasn’t too keen about the romance, especially since this books takes place over such a short amount of time. I get that you literally survived an alien invasion and whatnot with this person, but can you really be in love with them after like 12 hours? Nah, man. But it wasn’t as annoying as it could have been, so there’s that.

My biggest complaint about this book is it’s so long. So long. And so much stuff happens. Once the action starts, it literally does not stop until the last page. No wonder it’s so intense. Some of the stuff is absolutely crazy too.

But man, it was an entertaining read. If you like books with creepy aliens and dangerous escapades in outer space, Sanctuary is your book. Go read it. Because seriously, I’m still screaming about it.

~I received a copy of Sanctuary by Caryn Lix in the July 2018 LitJoy Crate subscription and chose to write this review of my own free will. All opinions are my own.~

Follow Keeper of the Wood Between Worlds on WordPress.com
Join 304 other followers

When your DnD party goes to the Fey Wild and encounters some dinosaurs, your friendly neighborhood bard polymorphs into a T-Rex to fight a T-Rex because DINOSAUR BATTLES.
What are you reading this weekend? 📚
Kalahari 2022 💦🐘🦒🦛
I am not a fan of mega boat but tonight was fun 🛶
Shiver me Timbers! We had a jolly good time at book club tonight with a shark-cuterie snack plate, a boat load of “Bon Bon Voyage” sweets, and several beaut of a loot pirate crafts! Big shout out to my mom @librarykat87 for always having fantastic ideas for book club. 🏴‍☠️
First time at Blossom to see the Cleveland Orchestra perform music from The Fellowship of the Ring and it was fantastic! (AND it didn’t rain! 👏🏻)
Worked in more of my reading journal! I finally caught up for May AND June (I know—I can hardly believe it). I didn’t read a ton in June that I wanted to highlight but that happens. At this point, these pages are just trying to capture the essence/aesthetic of the books I read. Some inspire me more than others. Sometimes that means recreating the cover in some way; other times it’s just creating a spread with scraps and stickers that match. ✌🏻
Look what’s (FINALLY) here! ♠️♥️♣️♦️
I took a walk last night and stopped to take pictures of The Dead Romantics by @heyashposton with all the pretty flowers I could find. 🌸🌼🌺