I loved the Illuminae Files by Amie Kaufman and Jay Kristoff. They were quite the thrill ride, and even though I’m not a fan of spooky space creatures, they had me hooked. So it was obvious I was going to read Aurora Rising by them as well, though I was worried it wouldn’t live up to my stupid high standards. But as usual, I was wrong. Aurora Rising was even better than I expected. 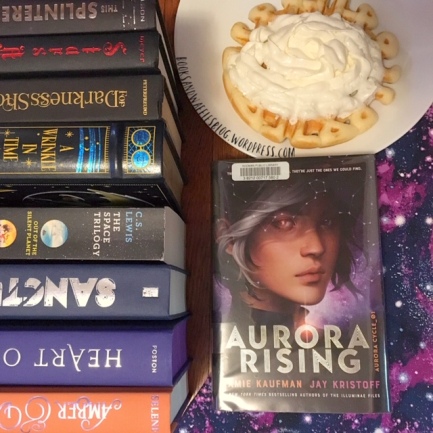 After Tyler Jones, Aurora Academy’s star pupil, makes a rash decision to rescue a girl stuck in cryosleep, things go from bad to worse. Stuck with a squad of the Academy’s misfits, Jones sets off on a mission that turns into a life-or-death escape from a group determined to capture the girl he just rescued. But when she exhibits unusual powers that lead them toward an off-limits planet, Jones wonders if something bigger is at play—and what that will mean not only for his future but the future of the galaxy.

Guardians of the Galaxy. Six of Crows. Heroes of Olympus. I love books with large casts. Aurora Rising has seven main characters, and they are all glorious. Full of differing personalities and layers of diversity, I never thought one character outshone another, and Amie Kaufman and Jay Kristoff did a fantastic job giving each a unique voice. This cast is definitely one that won’t be easily forgotten.

I love space adventures of all kinds, and Aurora Rising is definitely like getting a kick in the pants on a wild ride of space crazy. There are so many ups and downs, thrills and excitements sprinkled throughout this story. There are space battles, heists, creepy space monsters, death and destruction, spooky space abilities, life and laughter (and lots of Lord of the Rings references), and space elves. Yes, I said, space elves. I never knew I needed space elves in my life, but now I need more. (Kal, I love you.)

While these heart-pounding, holy-tardis-of-gallifrey-what-just-happened moments reminded me a lot of the Illuminate Files, this book is its own story. It is not a sequel. It is not set in the same galaxy/universe/whatever. The characters are new, the galaxy is different, and the mythology is completely on its own level.

That being said, if you liked the Illuminae Files or Guardians of the Galaxy or The Lunar Chronicles or even Stranger Things (see “spooky space abilities” for reference), get yourself to a bookstore or online and buy a copy of this book because you will love it.

I’m going to go curl into a ball now because book two doesn’t have a release date yet and I need more ASAP. 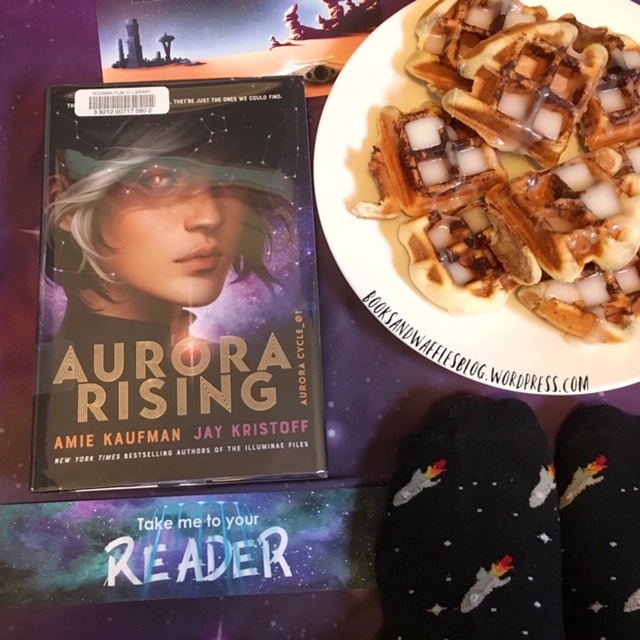 ~I checked out a copy of Aurora Rising by Amie Kaufman and Jay Kristoff from my local library and chose to write this post of my own free will. All opinions are my own.~

Follow Keeper of the Wood Between Worlds on WordPress.com
Join 304 other followers

When your DnD party goes to the Fey Wild and encounters some dinosaurs, your friendly neighborhood bard polymorphs into a T-Rex to fight a T-Rex because DINOSAUR BATTLES.
What are you reading this weekend? 📚
Kalahari 2022 💦🐘🦒🦛
I am not a fan of mega boat but tonight was fun 🛶
Shiver me Timbers! We had a jolly good time at book club tonight with a shark-cuterie snack plate, a boat load of “Bon Bon Voyage” sweets, and several beaut of a loot pirate crafts! Big shout out to my mom @librarykat87 for always having fantastic ideas for book club. 🏴‍☠️
First time at Blossom to see the Cleveland Orchestra perform music from The Fellowship of the Ring and it was fantastic! (AND it didn’t rain! 👏🏻)
Worked in more of my reading journal! I finally caught up for May AND June (I know—I can hardly believe it). I didn’t read a ton in June that I wanted to highlight but that happens. At this point, these pages are just trying to capture the essence/aesthetic of the books I read. Some inspire me more than others. Sometimes that means recreating the cover in some way; other times it’s just creating a spread with scraps and stickers that match. ✌🏻
Look what’s (FINALLY) here! ♠️♥️♣️♦️
I took a walk last night and stopped to take pictures of The Dead Romantics by @heyashposton with all the pretty flowers I could find. 🌸🌼🌺