When it comes to reviewing books, I think the world can be a little harsh. If you scour the internet, you can find reviews for all types of books where readers have ripped apart the tiniest details in order to criticize an author or a story. Sometimes, books don’t need to explain every single aspect of the story for it to be a good book. This is the case with Before I Disappear by Danielle Stinson. A lot of crazy stuff happens in this book. Some things are explained, some things aren’t. And that’s okay. Because I still enjoyed it. 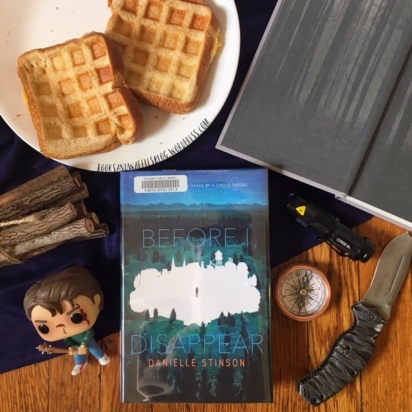 Rose moves her family and their trailer to Fort Glory, Oregon to start a new life where nobody knows them. But then the entire town disappears, including her brother Charlie and their mother. When she tries to go after them, Rose becomes trapped in the Fold, a part of the woods caught between the real world the town where the laws of physics don’t matter and everybody’s inner darkness manifests in startling ways. With four other teens, Rose follows clues her brother has left behind in an attempt to locate him before he disappears… forever.

Before I Disappear is one of those books that grabs you by the hand and doesn’t let go until you reach the last page. So much crazy stuff happens that it’s hard to process what exactly I was reading other than “Oh my gosh, oh my gosh, oh my gosh.” This book is insane and intense. And I liked it.

Part of Before I Disappear are reminiscent of Stranger Things, except the weird phenomena that happens is more thoroughly explored with scientific explanation. I didn’t understand all of it, and not all of it was fully clarified, but I appreciate how much thought and research Danielle Stinson put into her story. She didn’t just throw the characters into this weird placed called “The Fold” and say “because I said so.” She gave actual science-y explanations for how something like this could possibly happen. And it was weird.

As for the characters, they are the heart of the story. The sibling relationship between Rose and Charlie fueled the plot and ripped my feelings to shreds all at the same time. Rose, at times, came across as a blank slate, but I didn’t mind because it was easy for me to step into her shoes and become part of the story, which made the book much more memorable than if I had felt like I was watching from outside the circle.

Ian, however, is my favorite character. His story and struggles were so moving that I couldn’t help but fall a little in love with him right alongside Rose. I wasn’t too keen about Rose and Ian using the l-word toward each other after only knowing one another for a few days. I understand they are in a desperate, life-or-death situation and emotions are running high, but I wish it had been more toned down. Less “love” and more “Hey, I’m just super attracted to you and want to see what happens with this.” I didn’t even mind that they kissed after such a short time frame, but saying, “I love you” really put me off.

As for the ending… I knew it was coming, but it still jolted me. I wish there had been more to what happened after, like an epilogue showing the aftermath of the wormhole and The Fold, because I have so many questions that still need answers.

But that’s okay. Sometimes books don’t need to explain everything or answer all my questions to be a good story. Sometimes that aura of mystery gives a story that extra boost between “good” and “great.” Before I Disappear definitely won’t be for everybody, but for me, it is an incredible, character-driven story that just won’t let me go.

~I checked out a copy of Before I Disappear by Danielle Stinson from my local library and chose to write this review of my own free will. All opinions are my own.~

3 thoughts on “Book Review: Before I Disappear by Danielle Stinson”